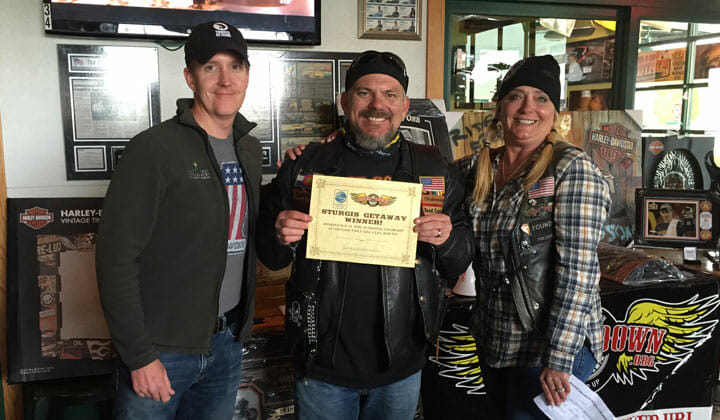 On Saturday, May 14, over 200 riders registered to join BikerDown and The O’Sullivan Law Firm at Rocky Mountain Harley-Davidson to take part in the 2016 Look Twice Save a Life Ride, which supports motorcycle awareness across Colorado.

“The Look Twice Save a Life Ride seeks to educate auto drivers about the importance of looking twice before making any moves,” says Laure Easton-Montoya, founder of BikerDown. “I’m a true believer that people who get behind the wheel of a car would not consciously want to hit a biker. This ride demands that auto drivers to pay more attention to what is happening outside their ‘bubble’ and to be more aware of motorcyclists.”

The day started at 9 a.m. and included two exciting events: The Look Twice ride itself and also the Sturgis Getaway Giveaway, sponsored by The O’Sullivan Law Firm. Since January, BikerDown has been promoting the Sturgis Grand Prize, which includes an RV rental at the Buffalo Chip RV site (reserved in the South Forty camping area) and two Early Bird Admission passes to all Buffalo Chip concerts, including Kid Rock and Miranda Lambert. This year’s Sturgis Motorcycle Rally will be held August 8 through 14.

Look Twice Save a Life Message

Before the ride started, Easton-Montoya spoke to the crowd about the importance of educating auto drivers to look twice.

When we educate auto drivers to look twice before making a move, we could literally be saving our own lives or the lives of our loved ones.

“This is proof that BikerDown is serving a huge need,” says Easton-Montoya, who encouraged more people to become members and to support the organization. “Most of the victims we help are in the hospital when we are contacted and we’ve learned that the families are as traumatized as the bikers.”

She also said the organization continues to grow and they are proud to be able to help even more people year after year. Additionally, she urged everyone present to purchase as much auto insurance as possible and to protect themselves with another layer of insurance by buying UIM or Underinsured Motorist Coverage. UIM covers you against other drivers who aren’t covered or who have low coverage.

After Easton-Montoya spoke, the ride began at 11 a.m. Temperatures in the city were chilly, which impacted rider attendance, but it was sunny and warm in the mountains!

The ride ended at Quaker Steak & Lube in Westminster where participants gathered for lunch and the Sturgis drawing. Rich Wilson was the happy grand prize winner and he was thrilled to find out he’d be attending Sturgis in style!

A huge “Thank you!” to everyone who attended and who helped to make this year’s ride a great success!