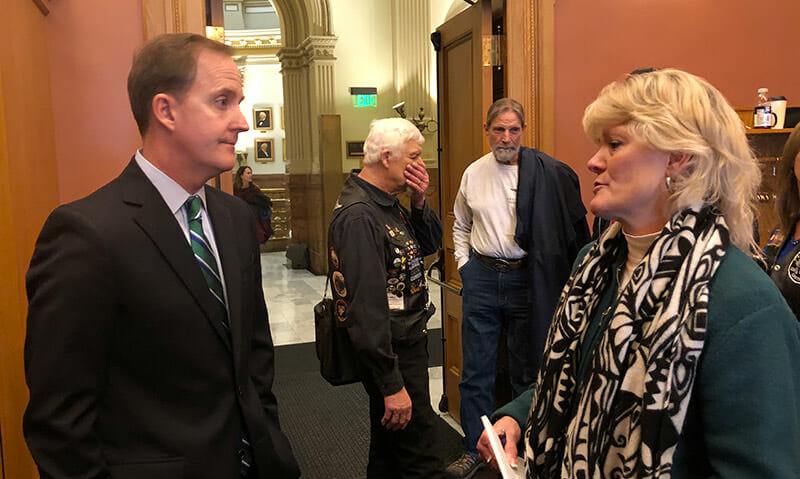 Scott O’Sullivan speaks with Susan Dane of CORD prior to the January 24, 2019 meeting with the Senate Transportation and Energy Committee.

For several years now, I have been working with Susan Dane of ABATE and with Colorado Senator Lois Court to end distracted driving in Colorado. We’ve had some successes: it is now illegal to text while driving in Colorado and we were able to increase the fines last year to levels that should change behaviors.

This year, we want to make it illegal to hold your phone while driving. (While it may now be illegal to text while driving, oddly a police officer cannot pull you over for using your phone while driving unless he/she sees you textingon the phone. Police have said that it is very hard to enforce.) We want people to have two hands on the wheel. And on February 14, we took one big step forward when the Colorado Senate Transportation and Motor Vehicle Committee passed a hands-free law on to the full Senate.

Let me provide a little history: Back in 2017, Susan Dane, Senator Court and I collaborated on a bill titled, “The Increase Penalty for Texting While Driving Act,” which increased the penalty for adults found guilty of distracted driving from $50 to $300. It passed, and we were thrilled. However, those of us involved were still unsatisfied with Colorado’s laws.

We would like to see Colorado join the 16 others that prohibit all drivers from using hand-held electronics while driving. Therefore, last year (2018), Susan and I worked again with Senator Court on a bill titled “The Use of Mobile Electronic Devices While Driving Act.” This bill would have made Colorado a hands-free state. In a nutshell, this bill would have made it illegal to use anymobile electronic device while driving, with an exception for adults who use hands-free technologies, such as Bluetooth.

What happened to that bill? As Michael Roberts reported in Westword…

Nonetheless, the bill was scheduled to be heard by the State, Veterans, & Military Affairs committee, which is frequently referred to by General Assembly insiders as the “kill committee.” And in this case, the panel lived up to its nickname. The measure was defeated in a party-line vote.

But you can’t keep a good cause down! In late 2018 and early 2019, Senator Court worked on the bill again and, on January 24, 2019, I (along with many others) testified before the Transportation Committee in support of a new bill sponsored by Senator Lois Court. It would make it a primary offense to hold any hand-held device while your vehicle is moving. If a cop sees you holding your phone while driving, he or she could pull you over and give you a ticket. The idea, of course, is that people need to have both hands on the wheel and their eyes on the road.

At the end of that day, we felt deflated and concerned. The bill wasn’t killed, but it wasn’t passed. We went back to the drawing board to make changes that we hoped would bring consensus and Senator Court took it back to the committee.

Under the revamped bill, police can still pull you over and ticket you for holding a mobile device in your hand while your car is moving. However, one of the main concerns we heard was that the fines proposed in the bill were too high. So, Senator Court reduced the fines and there is an additional, heavier fine if the police officer also sees you texting while driving.

On February 14, the Committee voted on this revised bill (no testimony was taken) and passed it on to the full Senate!

On February 14, the Committee voted on this revised bill (no testimony was taken) and passed it on to the full Senate!

There is still a big fight ahead for us to get this law passed. We need full Senate approval, then it will go over to a House committee where it will invariably require changes, then to the full House and then, hopefully to the full Colorado General Assembly.