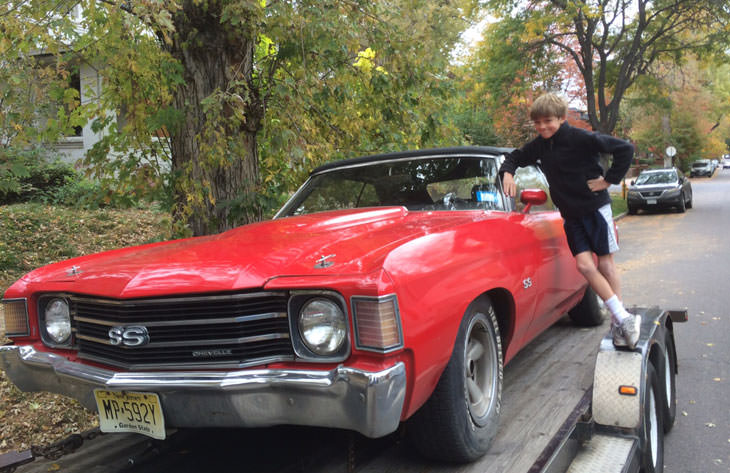 In 1974, Dad received a yellow convertible 1972 Chevelle SS as a trade-in. It had a 350 engine and a four-speed Hearst shifter. My dad and I fell in love with it! I was only five at the time, but my dad decided to keep it for me.

When I was in high school, that’s the car I learned to drive in. We lived on a big, wide-open property with a long driveway (back when Jersey still had wide-open spaces!) and I drove like the Dukes of Hazzard all over the place.

In the 80s, the car required some repairs: we replaced the engine and painted it red. Then, of course, I went off to college. After law school, I had no place to store the car, so my dad kept it in a barn where it sat on a gravel floor for nearly 15 years. When it came time for my parents to sell their home, we pulled the car out, evicted the mice, and got the engine running again.

Then, I brought it to Denver.

Last fall, I handed my precious Chevelle over to Forever Customs, hoping they could restore it to its original grandeur for my own sons, Michael and Tommy. It turns out, Michael has the same passion for the car that I did when I was his age. Michael and I have watched as Joseph Depetino has poured hours into this car, which needed a lot more work than I anticipated. When this is all said and done, the car will have a brand new frame, the body will be about 60% original and it will have a new engine. The interior is all original and we’re returning it to the bright yellow it first sported when it rolled off the assembly line as an instant-classic 70s muscle car.

I’m excited to teach my boys to drive in this car, lower the top and drive around on summer nights with my family, and remember the bond I shared with my dad as we delighted in this car together.