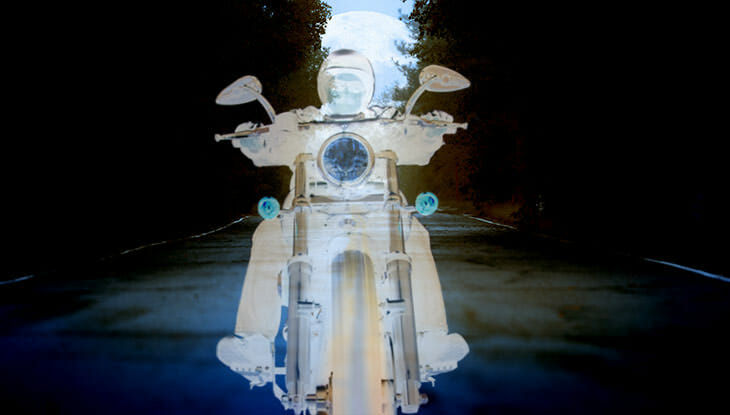 Sadly, in my line of work, I see a lot of motorcycle accident victims. And every summer, Colorado motorcyclists head out on the road, and I hear so many false claims about helmets, rider habits, car driver attitudes and even trial results from motorcycle accidents, but a few of these popular myths need to be debunked. Read on!

Motorcycle Myth 1. Car Drivers Don’t Care About You (or They Actively Hate You)

This is not true. In fact, most car drivers (and I’ve dealt with a lot of car drivers in my professional life) want to help keep motorcyclists safe. Often, a driver’s inability to see you – and then acting on that false information, such as turning into your lane – can be taken personally by a biker. But you need to stop taking car drivers’ actions so personally and just do what you can to be as visible as possible.

Even better, when you see a driver using caution around you, giving you a lot of space, waving you on and treating you with respect, reward that driver with a thumbs-up! However, when a driver is clueless, don’t assume that he or she hates you; a lot of drivers are clueless behind the wheel! (And I would imagine that this even includes you from time to time, when you’re in your car!)

Scaring the hell out of other people on the road does not keep you safe. In fact, it can make other drivers more aggressive toward you. But as for whether loud pipes keep you safer, research doesn’t bear that claim out. Research actually shows that bikes with loud exhaust systems crash more often than those with stock pipes. (I wonder if this is due to the aggression or surprise factor that I mentioned.) If you really think being loud makes you safer, install a louder horn.

I know that hard-core motorcyclists don’t want to hear about the safety benefits of helmets from an expert personal injury lawyer in Denver like me, so instead, I will quote a hard-core writer/motorcyclist at MotorcycleCruiser.com:

“People look at the seemingly low impact speeds used in motorcycle-helmet testing and assume that if you are going faster than that, the helmet will no longer be up to the job. That ignores a few critical facts: 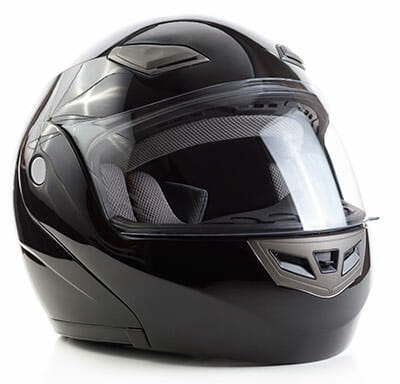 False. In fact, the Department of Transportation’s safety standards require that all helmets provide at least a 210-degree field of view. This is more than enough to allow for normal peripheral vision, which is only about 180 degrees. Do me a favor: Go visit my friends at Denver’s Erico Motorsports and get fitted properly for a full-face helmet and have them explain why you need it. I think you’ll find that it’s comfortable and it also gives you plenty of peripheral vision.

This might be a good place to mention that not all helmets are created equally. There are some “cool” helmets out there that will do very little to protect your brain in an accident. These so-called “novelty helmets” were the subject of new federal guidelines in 2015.

When you’re thinking about buying a new helmet, visit this website to be sure it is fully compliant with U.S. Department of Transportation requirements.

Motorcycle Myth 6. Motorcycle Helmets Protect You Just Enough to Suffer a Brain Injury, Leaving You to Live a Life as a Vegetable

Again, let me quote MotorcycleCruiser, because the author says it so much more effectively than a personal injury attorney ever could:

“Of course it’s possible your helmet attenuates the impact energy enough to keep the injury from being fatal but not enough to keep all of your eggs from getting scrambled. However, that’s rare, and if you hit that hard, you are likely to get killed by some other injury. It’s actually the un-helmeted rider who is likely to cross from animal to vegetable kingdom, and often from a relatively minor impact that would have damaged nothing but his ego if he’d been wearing a DOT helmet.”

Highways are safer for motorcyclists.

Motorcycle Myth 7. Roads and Streets are Safer for Motorcyclists than Highways

Most of us think of the speeds that we see on our Colorado highways and imagine that those roads are less safe. But in truth, roads and streets are filled with many more potential hazards: driveways, children, toys, intersections, blind spots galore, oncoming traffic and more. While highways may be speedier (though not necessarily in Denver these days!), everyone is moving in the same direction and the flow of entering and exiting traffic is much more controlled.

Also, studies show that motorcyclists get into far more accidents on roads and streets than they do on highways. Therefore, highways are clearly safer for motorcyclists.

Motorcycle Myth 8. If You’re About to Crash, Lay Your Bike Down

Do you know how many riders I’ve had to help through injuries to their legs simply because they made the decision to lay their bikes down? Tons! I’ve also seen many amputations from this practice. It is simply never safer to lay your bike down than to hit the brakes and take evasive action. Period.

There are a lot of drivers on the road who carry little or no insurance.

Motorcycle Myth 9. If I’m in a Motorcycle Accident, I’ll Make a Lot of Money from the Insurance Company

Well, maybe. But if you’re getting a lot of money it’s because you were very, very hurt and also because the other driver had very, very good insurance. In my experience, you don’t want to rely on either one of those things happening.

First, you don’t want to get that hurt. I work with motorcycle riders who will tell you that they would happily give up the large sums of money they received after an accident if they could have their legs back,  their ability to ride again, or the ability to sleep through the night without pain. (Read Reid’s story if you want a personal account.)

Second, there are a lot of drivers on the road who carry little or no insurance. In Colorado, the minimum amount of liability coverage that a person must carry is $25,000. For some Denver motorcycle accident victims, that sum won’t even begin to cover their first visit to the hospital, let alone the ongoing care they will need. Therefore, if you truly want “a lot of money from the insurance company,” you’d better buy an Underinsured Motorist policy from your own insurance company.

Please stay safe out there. If you need an experienced attorney, consult a Denver motorcycle crash lawyer at (303) 388-5304.

Motorcycle Law: A Little Book About the Big Things You Should Know — This is an extensive reference book available in iBook form, online, or as a PDF