Can Motorcycles Ride in the Carpool Lane in Colorado? 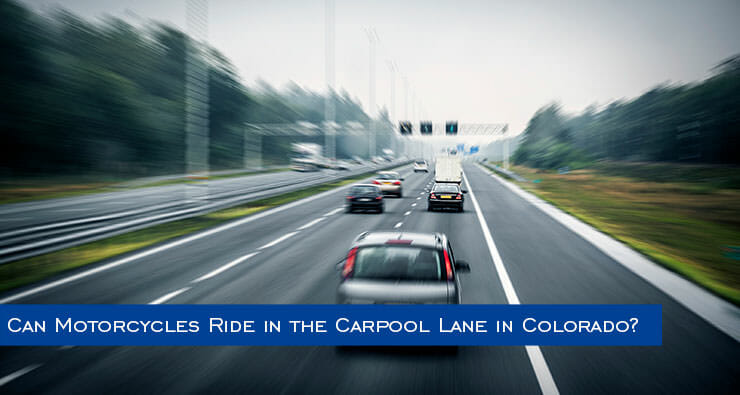 Nothing makes me happier than when I get a question from someone who describes himself as a ‘frequent reader’ of my blog or magazine articles. It’s always nice to know that I’m sharing information that people use! The gentleman was a Denver motorcycle rider, and his questions were: “Can motorcycles ride in the carpool lane in Colorado? What are the rules for motorcycles in Colorado’s HOV lanes?”

HOV lanes can be very dangerous for motorcyclists.

That is a very good question, not only because it’s important to know the rules, but also because carpool lanes – commonly known as HOV lanes – can be very dangerous for motorcyclists if they’re not hyper-aware of their surroundings. So, I’m going to cover both topics here:

To make this a bit simpler, here is the information from the CDOT website on carpool lanes:

Now that you know which HOV lanes and Express Lanes are free for motorcyclists, use them when you can, without hesitation! But I wouldn’t be doing my job if I didn’t include a warning in this article about the hazards to motorcyclists in carpool lanes.

Let me illustrate with a personal experience:

One day, I was driving home from a court hearing in Boulder. I was on I-36 and, because I didn’t have a pass or transponder, I was in the regular flow of traffic to the right. During that long, tedious drive, I witnessed three different accidents! People speed up like crazy when they see an opening and then they jam on their brakes when everything slows down. And they hit each other. Obviously. The scariest part, though, was the fact that some people, in order to avoid hitting the car in front of them, swerved directly into the carpool lane without looking to see if there were oncoming cars or motorcycles.

Hitting a nearly-stopped car head-on could cause catastrophic injuries or death for a motorcyclist.

Another big issue that I see with carpool lanes is that the people who use them tend to speed, and they get impatient with drivers who go the speed limit. While this can be stressful if you’re the driver of a car going the speed limit with some speed demon behind you, it can be downright dangerous for a motorcyclist. If you see one of these drivers zooming up behind you, I recommend that you check the right-hand lane to determine if you can get out of his way. Once he’s passed, return to the carpool lane safely.

The key to your safety in a carpool lane is to keep your situational awareness on high alert. People on your right may be growing increasingly frustrated with the slow pace of their lanes and may cause accidents. Drivers behind you might want to push you faster than you should go.

Finally, please send me your questions! My goal is to share information in my blogs and magazine articles that helps people stay safe, save money and protect themselves. I’d love to hear from you. Scott@osullivan-law-firm.com, 303-388-5304.

Motorcycle Contest Benefits BikerDown — YES! We’re giving away a 2017 Triumph to benefit our favorite biker non-profit. You can get details here to enter.