The other day, I was driving to work and a guy rode by me on a scooter. He was wearing flip flops, shorts, a button-down shirt (unbuttoned all the way), and no helmet. Sure, he looked like the epitome of carefree sunshine fun, but I found my heart in my throat. Scooter safety appeared to be completely disregarded to this rider.

If that scooter driver was in an accident, he would leave his flesh all over the road. Literally. I hate to be Debbie-Downer because I know that scooter riders have as much pride of ownership as many bicycle and motorcycle riders, and I think scooters are a great way to get from A to B! But I feel sick inside when I see scenes like I did today.

Another scenario we’ve all seen: the cute metro commuter in her skirt, high heels, trendy cross-body bag… and no helmet.

In a way, scooter riders are the long-neglected step-children of our safety culture. They aren’t targeted by as many messages as bicyclists and motorcyclists. But it is just as important that scooterists cover their feet and legs, protect their torsos and, above all, protect their heads. 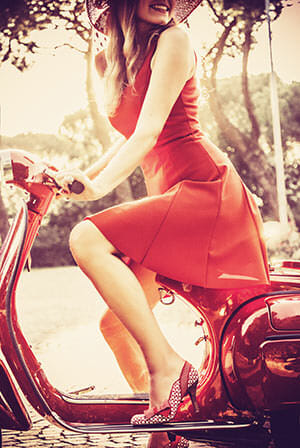 Scooter riders aren’t only vulnerable to other drivers on the road; what about your own riding mistakes? I recently witnessed a very odd scooter accident: the scooter driver was trying to take a simple turn but he jackknifed the front wheel and caused his own accident. Like the first guy, he had zero protective gear on and he ended up sliding across the asphalt. His body was covered in painful road rash that would take weeks to heal, probably leaving scars.

Here’s another scenario we’ve all seen: the cute metro commuter in her skirt, high heels, trendy cross-body bag… and no helmet. Who wants helmet hair?

I see these people every day in the summer and I want to wrap them in bubble wrap.

I try not to share too many gruesome details about the cases I handle because no one wants to read about human suffering all the time, but I think it’s important for scooterists to know that they are vulnerable to the exact same traumatic injuries faced by motorcyclists. In fact, a 2014 study published by the National Center for Biotechnology Information found that scooterists who drive at speeds greater than 20 mph and on roads with a posted speed greater than 30 mph were more associated with “severe injury crashes.” 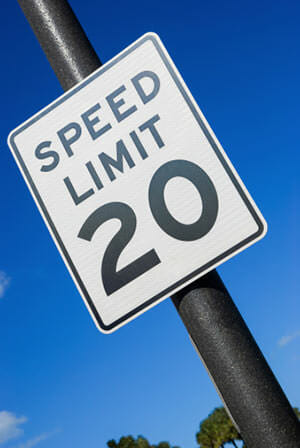 Additionally, another study published by the NCBI states: “Moped/scooter riders sustained a greater percentage of head/neck, facial, and abdominal injuries, whereas motorcycle riders sustained a greater percentage of upper extremity, thoracic, spinal, and lower extremity injuries. There was no statistically significant difference in injury severity, length of acute hospital stay, admission to ICU or survival to discharge from acute care between injured moped/scooter riders and motorcycle riders.”

If you need to read some examples of the injuries that motorcyclists face after an accident, please read the following stories:

Make Sure You Have Insurance

The study I cited above also found that over 90% of riders involved in moped or scooter crashes were uninsured. 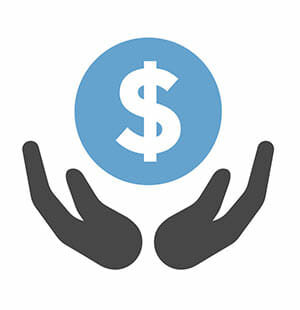 Think back to the young man who jack-knifed his own scooter and ended up with injuries all over his body. If, like the majority of scooter riders, he doesn’t carry insurance, he will be paying all of those medical bills himself. If his injuries had been more serious, such as internal organ damage, spinal damage or brain injury, he may have had to sell his property, including his home, to cover his costs.

Additionally, if you’re the victim of someone else’s bad driving, you can’t assume that he or she will have insurance to pay for your injuries. I have long recommended that motorcyclists carry $250,000 or more in Underinsured Motorist Coverage on their insurance policy because the potential for catastrophic injuries is so high. I recommend the same for scooterists. Though your scooter’s speeds won’t be nearly as high as a motorcycle, you still need to plan for high medical bills if you are ever in an accident.

Don’t delude yourself: on a scooter, you are very exposed and you must take steps to assure your safety.

When you purchase your scooter, roll a few items into the cost, just as if they came with the scooter. Every scooter rider should buy and use the following:

To make sure you’re seen by other motorists, it’s a good idea to wear high visibility gear, like bright colors or reflective metallic strips.

Know the Risks: Ride to Defend Yourself

Scooters are an awesome solution for short trips and fun summer excursions, but don’t delude yourself: on a scooter, you are very exposed and you must take steps to assure your safety.

What is Collision Insurance — You’d be very surprised to know that “full-coverage” is not what it sounds like. To be really protected you need to understand what each type of insurance covers.

The Worst Insurance Companies Ranked — We can tell you first hand that after you’ve been in an accident, even your own insurance will work against you. Find out who the worst offenders are.