Under Every Motorcycle Helmet Lives a Philosopher 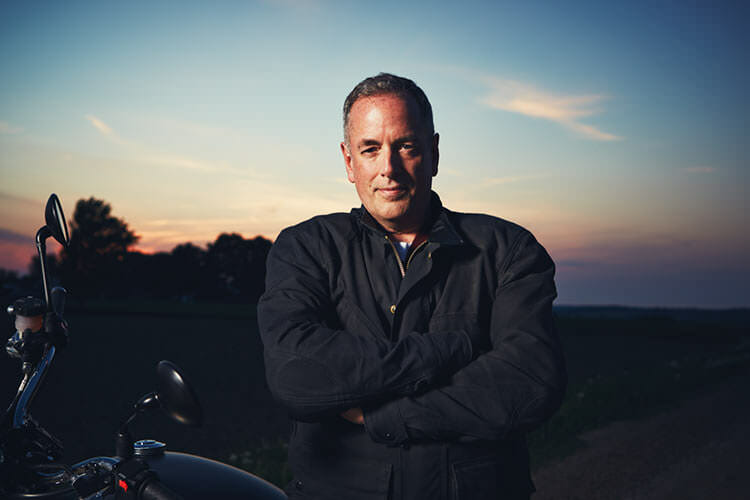 Bruce Philp was in his 50s when he says, “Something detonated inside me.”

“My reaction to it was almost a spasm,” he recalls. “I knew I had to get back into biking.”

“My bikes are the most important non-living thing in my life.”

Bruce had grown up in rural Southern Ontario, Canada, where, as a kid, he rode dirt bikes (“the gateway drug of motorcycling”). But, once he got his driver’s license (“your ticket out of town… and dates with girls”), he gave up biking.

He built a successful career as an author and marketing strategist, enjoyed a loving family life and raised three kids, who have now grown up enough to give Bruce and his wife a bit more time for their own interests. Additionally, when Bruce wandered across the street to the Yamaha dealership and experienced his motorcycling epiphany, he had been a horseback riding fanatic for over 10 years. Sadly, he had recently said goodbye to his beloved horse.

“In retrospect, I think there was a hole in my life that contributed to the reaction I had at the Yamaha dealership.”

Bruce says he immediately took a motorcycle riding course, began reading voraciously about biking and “went through a quick succession of starter bikes.” Today, he has three bikes, which he describes as having different riding uses and personalities.

There’s the BMW F 700 GS for long days in the saddle. “This bike has the least personality. It’s more a fit-for-purpose tool. It’s unobtrusive and not very engaging, but in cold weather or on long rides, it’s perfect.”

“The learning curve was steep but I was having fun.” 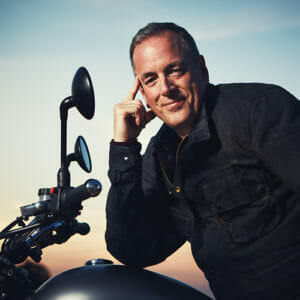 He also has a Ducati Monster 797 for city riding in Toronto. “I fell in love with the idea of the Monster. Designer Miguel Angel Galluzzi took the fairings off the sports bike and people went crazy. It’s a cool story. It’s an air-cooled twin engine and it makes great noise. People look as I’m going by, which is a lot of fun. This bike has charisma.”

Then there’s the Triumph Scrambler, which seems to inhabit a good chunk of Bruce’s heart. “I just love this bike. It has a great sound, gobs of cruiser-y, low-end torque and an up-for-anything personality. I feel like I’m 20 when I’m on that bike.”

Bruce adds that, today, “My bikes are the most important non-living thing in my life.”

In addition to falling head-over-heels for motorcycles, Bruce admits that he has fallen for the motorcycle community.

“The thing that blew my mind about this sport is the quality of the people,” he says. “Especially in this day and age, you don’t find yourself in many situations where there is a collective understanding that what connects us is greater than what divides us. But that’s true in the biker community. I love that… it’s just what I needed.”

He also started to recognize something in the passionate bikers he met and he came up with a bit of a slogan for this discovery: “Under every motorcycle helmet is a philosopher.”

A natural marketer and storyteller, Bruce began thinking that he wanted to find a way to share his love of biking and the people he was meeting. He considered a blog but then one day his wife suggested he start a podcast and that was all it took.

“The next day, I got on Amazon and ordered a mixer, recorder and microphone,” he says. “The learning curve was steep but I was having fun.”

And This Motorcycle Life was born. While Bruce’s podcast is relatively young – only 9 episodes posted thus far – the stories and production value are so high-quality that he’s gaining quick traction. Bruce says he spends upwards of 15 hours on each podcast, interviewing subjects, editing, playing the internal bumpers on his guitar, sourcing other artists’ music and getting their permission, and working with podcast broadcasters such as SoundCloud and iTunes.

A recent story tells the tale of Oliver Solaro, “Canada’s Ice Road Biker,” who had recently delivered half a ton of desperately needed supplies for the sled dogs of Churchill, Manitoba while riding his home-built snow bike.

Another podcast shares the story of Guy Arnone, “an avid rider and motovlogger who also happens to be the executive sous-chef at a Michelin-starred restaurant in New York City.”

Bruce is particularly excited about an upcoming show he’s working on about grand prix racing legend Freddie Spencer, whom he mentions with wide-eyed, schoolboy awe. “He’s done things on a bike that no one has done since!”

While it may sound cliché, Bruce says he doesn’t have any big goals for his podcast except to “give back to the community I love so much.” However, he does know that his podcast will always celebrate the motorcycle culture. “There are some podcasts that get gripey or critical and I understand the need for critics, but I just want to talk about how awesome bikers are.”

He adds, building on his “philosopher” theory, “I want to share proof of the fact that, under all the leather and plastic, bikers are a bunch of monks.”

Check out This Motorcycle Life online, where you can see beautiful images of bikes and bikers. (The picture and story about Olivier Solaro are instant classics.) Listen to the podcasts online or wherever you download your favorite podcasts.