Streetsblog Denver Pulls Back the Veil to Reveal Our Road Biases

David Sachs has a tough job. He is Editor of Streetsblog Denver, one of the many Streetsblog chapters around the country that are trying to change the way we envision and build cities. Yeah, that’s all. 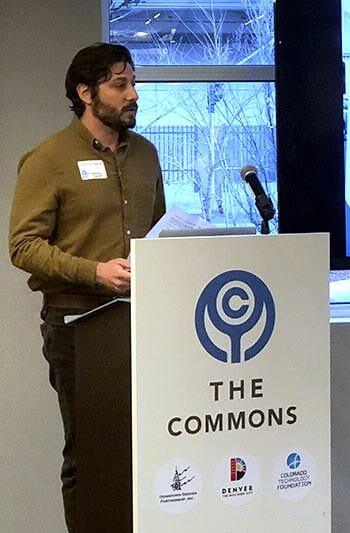 David Sachs speaks at the 2018 State of Biking event hosted by BikeDenver.

David says things like, “Our cities are designed to move metal boxes around. It’s absurd.” When he says these things, rookies to his ideas probably think, “Uh, yeah. So?” Our very concept of a city revolves around moving people from A to B to C in cars. We rarely question that process; instead, we jump in our cars and participate in the system.

But David wants us to question it all so that we can envision and build cities that are safer, less congested, inclusive, more human and healthier. He is “pulling back the veil” to reveal our own misguided faith in a system that doesn’t actually work.

In fact, as David says, “We have an infrastructure that literally kills people. Why do we keep designing cities for the most dangerous, least efficient mode of transportation?”

David and his fellow editors around the country write news stories and commentary about each of the cities or regions that they cover. David’s “beat” is Denver. Streetsblog also has staff covering New York City, Los Angeles, Chicago, San Francisco, the state of California, St. Louis, Ohio, Texas and the southeast region of the U.S.

“Why is it so ingrained in us that people will get hurt as a result of moving around our city? Why is that acceptable to us?”

Specifically, in Denver, where we can all attest to the fact that our traffic is out of control and likely to get worse, David is writing and speaking out against our region’s “heritage of driving,” and championing pedestrians, bikers and mass transit.

Because David believes that mainstream media are also victims of the traditional way of seeing a city’s streets (cars rule), Streetsblog Denver provides an alternative perspective on everything from parking garages to bike lanes to our hit-and-run epidemic.

“The media cover accidents with a status quo perspective,” he says. “If a person or biker is hit by a car, the media tell us that they shouldn’t have been wearing dark clothing. Why is it so ingrained in us that people will get hurt as a result of moving around our city? Why is that acceptable to us?”

David also wants us to understand this issue from a social justice perspective: When you build a city around the most expensive form of transportation – cars – you are marginalizing people who are too poor to buy a car, as well as those who are too young or too old to drive. 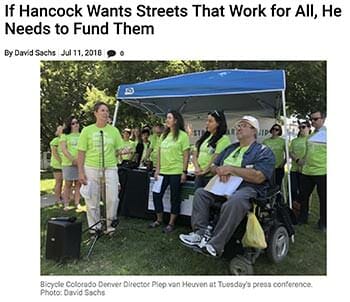 “I hope to create a city that is easy, safe, convenient and affordable to move around through our coverage and commentary,” he says.

As part of this coverage and editorial commentary, David promotes legislation that favors bikers, walkers and mass transit. He also holds politicians accountable.

For example, in 2016, Denver Mayor Michael Hancock announced a program to end deaths and serious injuries on Denver’s streets. David wrote a story about it, which states, “Last year, 57 people were killed in traffic on Denver’s streets, and hundreds more suffer life-altering injuries. Per capita, our traffic death rate is twice as high as Seattle’s, and traffic crashes are ‘the number one cause of morbidity and mortality related to trauma in our community,’ according to Denver Health Director of Emergency Medicine Christopher Caldwell.” 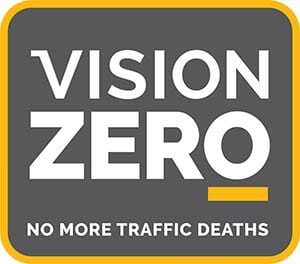 The story went on to share that, “The Hancock administration delivered two concrete tools today: An online “dashboard” that maps traffic deaths and serious injuries and details how they occurred, and a bicycle safety plan based on a long-awaited bicycle crash analysis.”

Sadly, though, the map only contains data from 2012-2015 and is never updated or refreshed. It is static and doesn’t help Denverites understand if their roads are actually getting safer.

So, David called Mayor Hancock out on the lack of transparency and, presumably, lack of commitment to changing the status quo. One story was titled, “The Longer Mayor Hancock Puts Off Safety Fixes for Federal Blvd, the More Lives Will Be Lost,” and explained that the number of people killed on Denver’s streets leapt from 57 in 2016 to 65 in 2017; clearly it’s headed in the wrong direction.

I met David at a BikeDenver event where we both spoke about our city’s need to make it safer for pedestrians and bikers to get around our city. We got to talking and I told him about the Denver Accident Map that I created. He thought it sounded like exactly what he was hoping the City of Denver would create. (The data is theirs, after all. It’s just a matter of building the map platform.)

“If you say you want zero traffic deaths by 2030, but you’re not reporting the number of deaths and it turns out deaths are rising, then clearly your plan isn’t working.”

After tinkering with the map, David wrote a story about it: “A Denver Lawyer Made a More Up-to-Date Crash Map Than the City’s Official Version.” The story reports:

One sign that a city is serious about its Vision Zero goals is a commitment to transparency: Publishing a regularly updated map of serious traffic crashes lets the public see what’s happening on the streets. When people can see where crashes are happening, they can see whether city officials are making any progress on traffic safety and hold them accountable.

Denver still doesn’t have a map like that, so attorney Scott O’Sullivan made his own.

O’Sullivan has worked with dozens of crash victims at his personal injury practice. “I’ve seen too much,” he says. “I’ve seen first-hand just how devastating it is on a repeated weekly and monthly basis for 20 years now.”

He wanted to see the citywide impact of crashes, and Denverites don’t really have access to that information. Denver Public Works’ official crash map doesn’t have data more recent than 2015, and it under-counts traffic deaths. O’Sullivan commissioned his “computer whiz” brother-in-law, Andrew Russette, to create this map.

… it shows that it’s very possible to integrate up-to-date crash data into a publicly accessible map — something the city still hasn’t managed to do.

David says mapping accidents and reporting up-to-date statistics is important for any city to make progress.

“If you say you want zero traffic deaths by 2030, but you’re not reporting the number of deaths and it turns out deaths are rising, then clearly your plan isn’t working. You need to do something different. This map helps us hold our government leaders accountable.”

When I asked him what advice he’d give my readers to help them make changes in their own lives or to envision our city’s future differently, he said, “Subscribe to Streetsblog Denver.”

He also shared a bumper sticker that he saw recently: “You’re not in traffic; you are traffic.” If we want a city where it’s safe to get around, then we all need to think of our own choices and make changes to create the city we want to live in five to 10 years from now.

“We need to be open-minded and we need to make it possible for people to get around the city without dying.”