Denver traffic is bananas! I have a friend who recently moved here from the Chicago suburbs and she said she’s been shocked by the number of cars on the road and the anger exhibited by drivers. Her impressions match my own observations, but somehow I thought the huge Chicagoland area might have similar (aka: awful) traffic. Apparently not. Denver is worse.

And, sadly, Denver car accidents and fatalities are also increasing as our population surges.

As many readers of my blog know, I’m a fan of Michael Roberts’ reporting for Westword. He monitors traffic and safety, and then he reports important stories, holding our elected officials responsible for the goals that they themselves set. (ie Vision Zero and our hands-free legislation)

Recently, Michael wrote a story listing Denver’s 10 most dangerous intersections. They are, in ascending order with Number 1 being the worst intersection in Denver for three years running:

According to Michael’s article, Denver’s population has increased by almost 400,000 people in nine years. That is an incredibly heavy additional load to our already-congested roadways. The result? Crashes and fatalities are on the rise. Last year saw the highest number of fatalities on record, with 65 fatalities on Denver’s roads. (Just in Denver proper!)

The Vision Zero website states that, in 2019, our fatalities came from these sources:

I also track Denver accidents on an open-source tool that my team created. We call it the Denver Accident Map and it draws data every night from the Denver Open Data Catalog, refreshing the map every 24 hours for anyone to use.

I also find it fascinating (and horrifying) to study the Denver hit-and-run statistics on the Denver Accident Map. Check out this cluster map for January 2020. One month alone filled the Denver map with hit-and-run accidents: 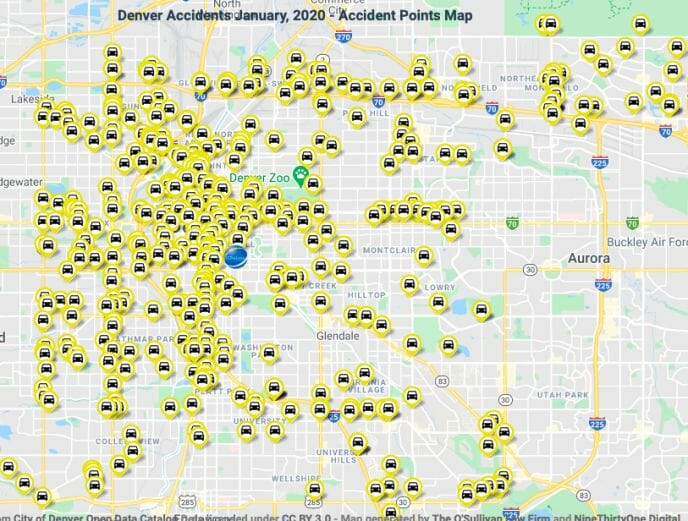 Or, for example, you can look at a specific month and determine how safe it is for bicyclists. Here is a snapshot of Denver bicycle accidents in June 2020. I clicked on one of the bike icons and discovered that it was also a hit-and-run accident! 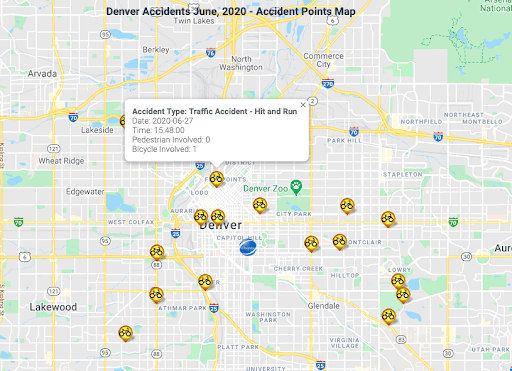 Why do I do this depth of analysis? Well, of course, I’m a car accident attorney in Denver, so I’m a bit obsessed with Denver’s ridiculous traffic. But also, I guarantee that I will find routes that enable all of us to avoid those top 10 dangerous intersections listed above!

I love Denver for so many reasons…but drivability ain’t one of them! I want to drive and bike using the safest routes I can. I also want my sons to take the safest routes to school and to see their friends. As we continue to grow, I hope to be part of solutions that enable our citizens to walk, ride and drive safely, without undue stress. It’s not just about the quality of life – it’s also about protecting life!